I’m sure anyone who has been following my blog for a while will know reading has always been one of my life’s delights. I’ve shared some of that joy through blog posts such as Widdershins, Holding the Centre, Revisiting Brideshead, The Book Thief, or Audiobooks, E-books and Old Friends

I don’t remember the process of learning to read. But I actually do remember not being able to read. And I have the evidence! :)

Two of the books on my laden bookshelves are the very first two books I ever owned. One is a collection of nursery rhymes, with gorgeous illustrations by Hilda Boswell. The other is a book of stories about a family of teddy bears: The Teddy Bears’ Picnic, with images by Dutch illustrator Willy Schermelé.

I still have a very clear memory of only seeing the pictures . Large slabs of each page (the text) meant nothing to me. But the illustrations – Hilda Boswell’s in particular – were a wonder-filled world to explore while the nursery rhymes or stories were read aloud to me. I can actually remember that time when I needed an adult’s voice to interpret and share the stories that went with the pictures. END_OF_DOCUMENT_TOKEN_TO_BE_REPLACED 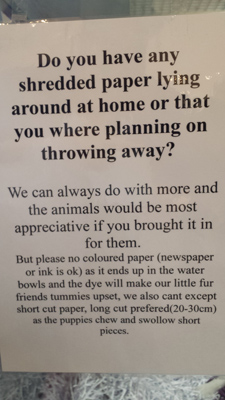 This sign was spotted in a local pet shop window.

Surely I’m not the only person horrified by it?

And no, on this occasion it wasn’t about mourning for lost trees – even if they are being recycled.

Nor was it wondering whether the cute wee puppies in the window came from a caring breeder or possibly one of those horrific ‘puppy farms’.

It could have been either of these things … but it wasn’t.

So what was it that made me groan so loudly I startled three other people who were cooing over the puppies? END_OF_DOCUMENT_TOKEN_TO_BE_REPLACED

If I were asked to choose the most beautiful-sounding words in the English language, I’d be very hard-pressed to do so!

For me, words are like musical notes. It’s only when they dance together in phrases and sentences, that they create beautiful symphonies … or sometimes crashing disharmonies, for that matter. :)

If I’d thought about it at all, I would never have considered “cellar door” would be held up as one of the most beautiful-sounding  – or euphonic – word combinations!

Yet that’s what I learned from this post on The Hot Word – which is the blog section of the very popular online reference source, Dictionary.com.

It was also fascinating to browse through the comments on that post, where readers suggested their own choices.

A later post on The Hot Word shared a list of words that had been most commonly mentioned by readers.

And I have to agree that serendipity is a beautiful word – but not only because of its sound.  It’s always been a favourite word of mine because of its meaning.

By the way … did you find yourself, as I did, reading that list aloud to hear its music?

What would be your choice? If you’ve got a favourite word or word combination that’s music to your ears, please drop me a line! :)