Whew … no more avoiding social media or other online posts about it! I’ve finally watched the last season of Game of Thrones. I enjoyed the whole series, but didn’t think the last season as good as those before it.

Be warned, the following has spoilers. If you are as late as I am finishing the whole series and haven’t seen Season 8, stop reading now! :)

All the previous seasons built up fevered anticipation about the coming of Winter and the final battle with the White Walkers and the army of the dead. Then in season eight, although the lead-up in the first two episodes was done well, I thought the murky, hard-to-follow Battle of Winterfell itself in episode three was a disappointment.

The first few seasons allowed far more nuanced exploration of the characters – something I think was lost in this final season. For example, inadequate screen time was spent exploring Daenarys Targaryon’s descent from heroic figure to genocidal despot. And Cersei, supposedly a powerful main character as the ‘final enemy’, had hardly any screen time at all – time in which she also seemed to do little more than stand gazing out of a window at Kings Landing.

Then there was the rather cheesy final gathering of Westeros leaders and their sidekicks, at which Bran the Broken was appointed King. (And it was a shame, from my perspective, this initially intriguing character hadn’t been developed more – he’d become “Bran the Bland” really.) This was followed by the meeting in the Council chamber, where the dialogue reminded me strongly of Life of Brian! The scriptwriters were inappropriately striving for comedy here I thought.

Finally, there was the rushed and overly “neat” tying up of all the main characters’ story arcs at the end. In this final season, character complexity and the exploration of tangled relationships, ambitions and actions were all largely replaced by spectacle and an apparently hurried attempt at ‘happy endings’ for the characters who survived.

Maybe more could have been done to preserve the depth and complexity of earlier seasons if this one had been given more than six episodes to explore themes, characters and motivations.

Nevertheless, in spite of these or other faults, there were some powerful scenes in this last season. One example was the slow, silent sequence where Tyrian, Jon and Davos walked through the ruins of Kings Landing. Another was Tyrian’s grief when he found Cersei and Jaimie Lannister in the rubble.

For all eight seasons, cinematography remained beautiful throughout and performances were always strong. In spite of my reservations about the final season, I thought the whole series was definitely worth watching. And, given a sufficient interval of time, it will be worth watching again.

Over a late lunch decided to begin re-reading “Up The Down Staircase” by Bel Kaufman. This time as an ebook. I loved it as a teenager … and again as a new (or nearly new) teacher.

I’m expecting to love it once more … but have only got as far as the end of the introduction, which is brilliant! Such an accurate reflection of the state of education from someone who has observed it over a whole lifetime.

Bel Kaufman was 101 when she wrote this intro in 2012. (She died at 103 in 2014). Her story of how she came to write the book and her astute observations and reflections are wonderful.

Both a sharp criticism of all that is wrong in education and a celebration of those marvellous men and women, the inspired and inspiring teachers who truly make a difference.

I’d recommend this as mandatory reading for everyone who, like me, is passionate about teaching and learning and what our education systems should be doing for our young. :)

Yep … play time … two words. Though I guess it was playtime too  … :) Thoroughly enjoyed Faith Healer, written by Irish playwright Brian Friel back in 1979 during The Troubles. 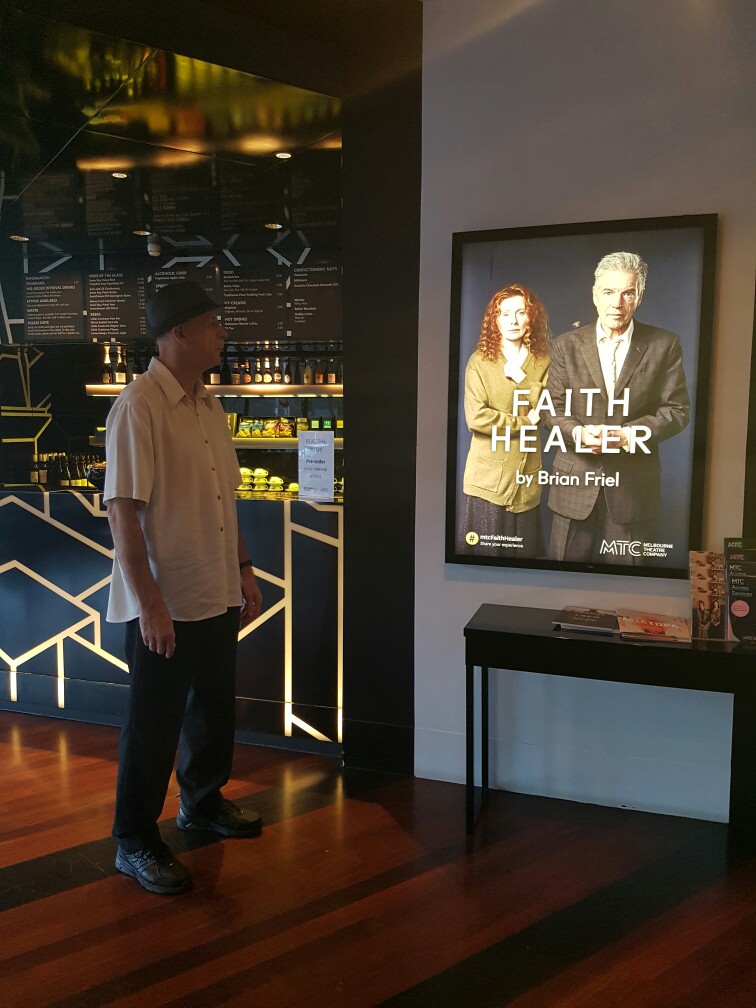 MTC put on a fantastic production, directed by Judy Davis. A minimalist stage with only a few props allowed the audience to focus on the poetry and emotional power of the script – a fascinating woven tapestry of four independent but linked monologues.

Strong performances from all three actors beautifully delivered the humour and deep tragedy of the story. Colin Friels as the troubled, yet charismatic faith healer, Alison Whyte as his devoted wife/mistress and Paul Blackwell as his long-suffering manager … all were excellent and often nuanced performances..

The whole play was a wonderful and at times very moving illustration of how we create our own realities. And how, as Fred Allen one said: