This is a wondefully inspirational video about the spirit of writing, with tips and commentary from some of the world’s well known writers and best known philosophers. They share with us not only advice about writing – but sound advice about life itself!

For example, Sir Ken Robinson tells us “your best insurance for the future is to really think hard about the things you’d like to do and the life you would like to lead now.” Or, as Gary Zukav says “your life is a co-creative endeavour, but you make the choices.”

I have just finished reading The Book Thief by Markus Zusack, and loved it!

It’s told from an unusual perspective, because the narrator is Death – though he doesn’t really like that name, or (even worse) “The Grim Reaper”.

It tells the story of Liesel Meminger, a child in Nazi Germany, and I thought it beautifully written!

Such wonderful turns of phrase! So many places where I paused in my reading, just to savour the language or the description.

Here is an example, taken from a passage where Liesel was fighting a young schoolmate, Ludwig Schmeikl, in the playground:

Oh, how the clouds stumbled in and assembled in the sky.
Great obese clouds.
Dark and plump.
Bumping into each other. Apologising. Moving on and finding room.
Children were there, quick as … well, quick as kids gravitating towards a fight. A stew of arms and legs, of shouts and cheers, grew thicker around them. They were watching Liesel Meminger give Ludwig Schmeikl the hiding of a lifteime. “Jesus, Mary and Joseph,’ a girl commentated with a shriek, ‘she’s going to kill him!’

Or here’s another passage – a description of a Nazi book burning in the town square:

The orange flames waved at the crowd as paper and print dissolved inside them. Burning words were torn from their sentences.
On the other side, beyond the blurry heat, it was possible to see the brown shirts and swastikas joining hands. You didn’t see people. Only uniforms and signs.
Birds above did laps.
They circled, somehow attracted to the glow … until they came too close to the heat. Or was it the humans? Certainly the heat was nothing. 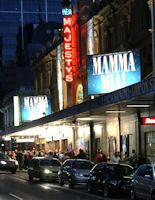 I love our city of Melbourne.

I don’t live there .. I choose to live way out of town. Not actually in a rural area, as I’m in the outer eastern suburbs. But I love my little corner of the world at the foot of the Dandenong Ranges, where I’m surrounded by trees, possums use my garden fences as their thoroughfare and I wake to the sounds of magpies and kookaburras each morning.

However I also adore visiting the city, a busy, bustling feast for the senses. It’s a fabulous smorgasbord of sights, sounds and smells. A colourful cornucopia that is ever changing, always fascinating.

I especially love the pastime of people-watching. Such variety and diversity to absorb!

I was in town on Saturday night, heading for a show at the Melbourne Comedy Festival.

And, as always, the walk to the venue is almost as enjoyable as the show itself! My people-watching hobby can go into overdrive. The noisy, glittering crowd becomes a series of snapshots …