You are here: Home / Featured / A Journey Shared 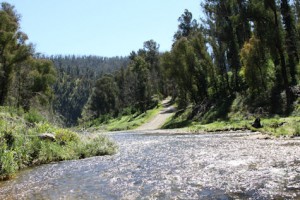 Here is a poem I wrote at the time:

You left instructions.
Thompson River
near Brunton’s Bridge
you said –
so here we are.
Our campfire plays
the last song of a tree
as we talk into the night
and watch the flames dance.
Memories and our love for you
weave through the fabric
of our conversation
like threads of gold.
At midnight,
mystical pivot
of yesterday and tomorrow,
our footsteps echo
on the small wooden bridge.
Silently
in velvet darkness
we stand watching
as torchlight, held steady,
makes your ashes a silver stream
falling softly to the river below
and silvery clouds
drifting on the wind.
For a moment and an eternity
the universe stands still
as earth, air and water
carry you away.

Returning to that spot, ten years on, proved a deeper and more emotional experience than I’d thought it might be.

I’d heard – but had forgotten – that the bridge had been damaged by fire a few years ago. My first tears came as I stepped out of the car and looked up at the bridge itself – now closed off by a wire fence on each side of the river, with blackened and broken wooden boards across its full width.

I knew going back would re-awaken memories of the grief and pain I’d experienced all those years ago.  But on the way there, it had also seemed so important to retrace my steps and stand in the middle of that bridge once more. And that was now impossible. 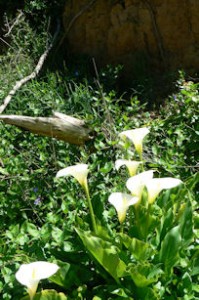 Yet, even through my tears, I experienced all over again the peace and beauty of this lovely spot.

I also saw, scattered in the grass around all our old campsites, beautiful white lilies that had never been there before.

And some campers, now gone, had left the still-burning embers of a campfire in almost the exact spot where we’d camped when we brought Glenn to this final resting place.

Somehow all these things combined to dry my tears.  Along with the presence of the lilies and the campfire, even the closure of the bridge seemed symbolic – and very apt.

No matter what happens in life – even if we ‘go back’ to earlier times and experiences – we never really return to the same place. Life has moved on, we have changed and – though memories remain – we can not walk the same path again.

As I left, I was aware of a profound sense of peace – and a feeling that Glenn’s spirit has also found its peace at last.

A Journey Shared is also the title I gave to a collection of poems I wrote over approximately 14 years, both during my time with Glenn and after his death. They are deeply personal, though certainly not works of literary merit. :) In the process of honouring and letting go this part of my life’s journey, in 2002 I collected them together from letters and diaries. In doing so, it seemed to me they told a story – and perhaps it is a story worth sharing. So here they are:  A Journey Shared

And one final note … for those who may be wondering. :)  Yes, those campers had been extremely careless to leave a campfire alight when they left.  As there was nothing available and I had no container to fetch water to extinguish it, I did report it on my return to Walhalla – and a member of the local fire brigade was dispatched to put it out.