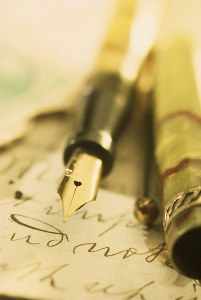 Remember to never split an infinitive.

The passive voice should never be used.

Do not put statements in the negative form.

Proofread carefully to see if you words out.

If you reread your work, you can find on rereading a great deal of repetition can be by rereading and editing.

A writer must not shift your point of view. END_OF_DOCUMENT_TOKEN_TO_BE_REPLACED

This is a wondefully inspirational video about the spirit of writing, with tips and commentary from some of the world’s well known writers and best known philosophers. They share with us not only advice about writing – but sound advice about life itself!

For example, Sir Ken Robinson tells us “your best insurance for the future is to really think hard about the things you’d like to do and the life you would like to lead now.” Or, as Gary Zukav says “your life is a co-creative endeavour, but you make the choices.”

If I were asked to choose the most beautiful-sounding words in the English language, I’d be very hard-pressed to do so!

For me, words are like musical notes. It’s only when they dance together in phrases and sentences, that they create beautiful symphonies … or sometimes crashing disharmonies, for that matter. :)

If I’d thought about it at all, I would never have considered “cellar door” would be held up as one of the most beautiful-sounding  – or euphonic – word combinations!

Yet that’s what I learned from this post on The Hot Word – which is the blog section of the very popular online reference source, Dictionary.com.

It was also fascinating to browse through the comments on that post, where readers suggested their own choices.

A later post on The Hot Word shared a list of words that had been most commonly mentioned by readers.

And I have to agree that serendipity is a beautiful word – but not only because of its sound.  It’s always been a favourite word of mine because of its meaning.

By the way … did you find yourself, as I did, reading that list aloud to hear its music?

What would be your choice? If you’ve got a favourite word or word combination that’s music to your ears, please drop me a line! :)