Yesterday morning I was in the train, on my way to a meeting in the city. Behind me a man was making a mobile phone call. His voice was loud, and I’m sure many if not most people in the carriage could hear all he had to say.

The conversation was about the fact he had recently taken up a senior position in the organisation where he worked, and he was calling the woman at the other end of the phone call to sound her out about joining their team. I guess it was what you might call a ‘head-hunting’ call.

During the conversation, the woman’s name, the name of the organisation, and the name of the department in which he worked were all mentioned. So imagine my surprise when, towards the end of the phone call, he was assuring her of the confidentiality of the situation and that he was making ‘discreet enquiries’!

The conversation certainly did not fit within my definition of ‘discreet’!

In reflecting on the experience, I was also reminded me of a professional colleague who produced several Facebook updates in which he had aired an angry and at times rather crude tirade against his ex-wife. Or of several folk who have posted Facebook updates about their drunk or debauched activities the night before.

And let’s not forget the red-faced embarrassment of those who thought their ‘discreet’ messages would be safe, but found their thoughts aired to the world at large through the ‘cablegate’ of Wikileaks. :)

In this digital age, boundaries between private and public life have often shifted, blurred or disappeared.

And ‘discretion’ has apparently been re-defined! :) 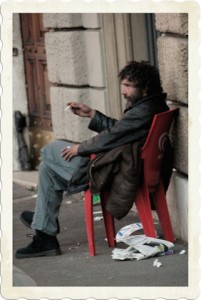 Unshaved, unkempt,
black nails, black teeth
and an old, tattered coat.
You’d dismiss him as derelict
and walk straight past.
Yet when he spoke
eagles soared,
mountains talked
and I glimpsed infinity.
“I’m a storyteller”
he said.
His stories wove spells
of dreaming and meaning.
The universe expanded,
and I felt for a moment
that I touched its limits.
Derelict,
Storyteller,
Spellbinder …
The essence of truth
lies perhaps in all three.

Today I left something undone that I wish I had done – though perhaps others may say I’m foolish to think so.

I was driving into the Dandenongs (a local mountain range) and had turned into a road that winds its way for about 10 minutes by car up the mountainside towards the town of Sassafras.

Just around the corner, before this road begins to twist and climb in earnest, I saw three young lads trying to hitch a ride.  Probably in their late teens or early twenties, all with short hair and casually dressed in t-shirts and jeans. That’s all I could tell from the quick glimpse I caught of them as, even while my foot hesitated over the brake pedal, I drove on by.

And basically that’s the end of my story.

I can hear you all now:

“But of course!”
“Sensible woman!”
“You did the right thing.”
“Three young men? You’d have been stupid to stop.”

A chorus of reason and common sense? Yes, that’s true.

But what if I’d hit the brake instead of the accelerator? A different story plays in my head … END_OF_DOCUMENT_TOKEN_TO_BE_REPLACED