You are here: Home / Reflections / Holding the Centre

Subtitled A Memior of Revolution and Hope, it is an inspiring read! 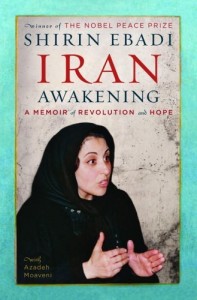 As I read, I was struck by the way in which Shirin Ebadi ‘holds the centre’ – that sometimes painful space where we stand in the centre of contradictions and paradox, yet resist the always present temptation to ‘take sides’ – to retreat to the more ‘comfortable’ space of certainty that one ‘side’ is more correct or more true.

As a lawyer and a speaker, she works tirelessly in the name of justice and she is certainly ‘on the side’ of justice and fairness in all respects – that much is evident.

But, although she abhors the injustices done to people by the various governments of Iran as well as those perpetrated by US intervention in her country, she nevertheless manages to remain ‘at the centre’.

She neither condems Iran outright, nor the United States and other western powers that she sees as having a severely detrimental impact on Iran’s culture, governance, progress and growth.

She was arrested and imprisoned in 2000 by the Iranian Government. Her life has been threatened and she now lives with the constant presence of state-appointed bodyguards to protect her – as well as to monitor her movements.

Yet she has refused to leave in the interests of personal safety – she maintains a deep and abiding commitment to her faith, her country and her life’s work there. 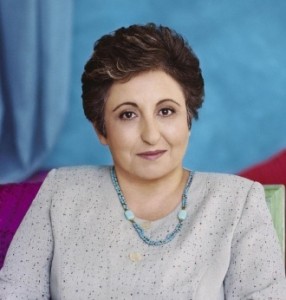 For some time written works by Iranian authors, or authors from other embargoed nations, were banned from publication in the United States.

As a lifetime defender of free expression, Shirin Ebadi was an active contributor to the fact that on December 16th, 2004, the US  Treasury Department revised its regulations, finally allowing publication of these works in the United States.

About this change, she says:

Bellicosity and brinkmanship have brought us to where we stand now, but they remain ingrained habits for both sides. We may need a horizon of decades to wear down the present monolith of mistrust. But such small steps remind us that by using the political process to change each others’ positions, our fates can be entwined in ways that are fruitful.

Also in her own words:

Iran, for its part, must peacefully transition to a democratic goverment that represents the will of the majority of Iranians. …

The West, for its part, has the option of using diplomacy to pressure Iran to change its behaviour, from its human rights record inside the country to the nature of its nuclear energy program. The threat of regime change by military force, while reserved as an option by some in the Western world, endangers nearly all of the efforts democracy-minded Iranians have made in these recent years…

For in the end, the Iranian Revolution has produced its own opposition, not least of educated, conscious women who are agitating for their rights. They must be given the chance to fight their own fights, to transform their country uninterrupted.

Holding the centre – that space between opposing ideas, forces or ideologies – is at the very least an uncomfortable place to be. And, as Shirin Ebadi’s story illustrates, it can also be a dangerous place.

After reading her story, I’ve decided Shirin Ebadi is definitely a heroine of mine.

She is ‘holding the centre’ with great courage and grace.

And hers is indeed a voice of hope for our time.