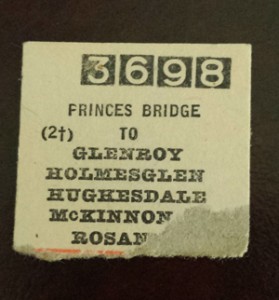 Was I reading that particular book on that train journey so long ago? Perhaps. I don’t remember that part. But as soon as I saw the stub, other memories took over. I was no longer sifting ‘stuff’, surrounded by boxes and dusty books, but had become a child again in the city for a day.

I wonder who else remembers Princes Bridge Station in Melbourne? It used to be the city terminus for those lines, before the loop and before Federation Square.  It can’t have been very memorable really. A quick search and I could find almost no pictures of it on the web at all. So I have to rely totally on memory.

I do remember a public space over the top of the station – a kind of city square, but quite stark and plain. Not terribly interesting in itself, but the great thing was you could stand up there and look out over the rail-yards – something we loved to do as kids. Spending time watching the trains from there was almost as much a family ritual as our pleas, when travelling to the city by car, to “go past the Skipping Girl, Dad!”

And I remember the old ‘red rattlers’ These trains are never seen here nowadays, except in museums, though I think the last of them were actually still running in Melbourne as late as 1990 or thereabouts. I also found they were alive and well – and still in operation – in Boston, USA, when I was there in 2003! :) But they’re no longer in Melbourne. I remember they were noisy, hot in summer, freezing in winter and (once upon a time) had smoking and non-smoking carriages. They had hard, uncomfortable seats and (in older models) overhead luggage racks that were way too high and out of reach for a child. That part I remember well!

As for Princes Bridge Station? Nothing special … well, except perhaps for the Central Station Records shop in the arcade outside.  :) A nondescript, self-effacing corner, humbly taking its quiet place on an intersection that hosts three far more impressive Melbourne icons.

There’s St Paul’s Cathedral, majestic, sober and oh so Gothic (or should that be ‘neo-Gothic’?) , dominating the skyline on one corner. I’ve always thought it a beautiful building, inside as well as out. And the choir singing carols at the midnight service on Christmas Eve? Glorious.

On another corner is Young & Jackson, home to the once highly scandalous and controversial nude painting Chloé. This was the Princes Bridge Hotel from 1861-1875. But since 1875 it’s always been Young & Jackson, another Melbourne icon. And Chloé has gazed out over the heads of bar patrons there,  from all walks of life,  for over a hundred years.

Then there’s Flinders Street Station, with its green dome that can be seen for miles and its set of clocks showing train departure times.  From time to time over the years there have been redevelopment plans –  or rumours and rumblings of plans – that would threaten the very existence of the dome and the clocks. But hopefully the shadow of potential public backlash will continue to thwart those ideas. “Meet you under the clocks” or even “meet you on the steps” are idioms peculiar to Melbournites, and have been for several generations.  Where could we arrange so easily to meet if not for our beloved Flinders Street Station?

So I remember Princes Bridge Station far less for itself than for these other buildings. Emerging into the sunshine on the corner, rail-yards behind me and these three venerable old friends before me, I knew I’d arrived. This was my Melbourne, my home – graceful, bustling and beautiful.

But things are different now. Instead of shy, plain, self-effacing Princes Bridge, we have brash Federation Square that has muscled its way in to shout its presence and dominate the street-scape.  For many Melbourne folk, including me, it’s a an eyesore and most definitely does not ‘fit’ with the other three corners of that intersection.

With a different design, it could have been a glorious companion for the other three. It could have mirrored or complemented their beauty. Old and new together in harmony. Instead it’s a discordant note. A rough, unwelcome gate-crasher to an elegant party. A rude interloper disturbing the peace.

Don’t misunderstand me. I am not anti-progress or against modern architecture. Some modern buildings are truly beautiful. With graceful lines and awe-inspiring designs they soar and delight the eye. But from my perspective, Federation Square is definitely not one of them. And certainly not with that clunky, glass-walled visitor information centre plonked like an afterthought in front of it!

In terms of travel convenience, I don’t miss Princes Bridge Station at all. Whatever your complaints and grumbles about our Melbourne train service, it was far worse before they built the loop! And the loop made Princes Bridge redundant.

But I do miss that first glorious moment of arrival, delighting in the three majestic old buildings in front of me.

I miss that first breath-holding pause and that quiet corner in the sunshine.