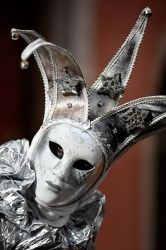 There’s a beautiful Hindu legend about the god Indra, who commissions an artisan to craft a vast net across the universe.

When the net is complete, at each junction Indra places a shining jewel – the facets of which reflect every other jewel in this cosmic network.

Each jewel represents a single atom, cell or life form in the Universe and all are intimately connected with one another. Any change in one jewel produces a change, however small, in all the others.

The legend also reminds me of a passage from Sinuhe the Egyptian, written by Mika Walthari in 1949:

Both of these stories – a 3rd century metaphor and a post-WWII novel – resonate for me in relation to our modern, networked world.

As human beings we are all interconnected. Even a small change in one of us can ripple out through those connections to make changes in others.

Or, as Peter Block said more recently, we can “change the world, one conversation at a time”.

My thanks to Doug Benner for his kind permission to use the beautiful photograph above.

Growling thunder this morning reminds me of my childhood. I was no longer frightened by loud crashes of thunder, when I knew it was just the gods playing a raucous game of bowls.

As a child I devoured every book of myths, legends and fairy tales I could find. My journey through these tales was one of fascination, delight, awe and mystery. My favourites were not the sanitised versions, but those which held sadness and wistfulness or which spoke of risk, of wrath and exploring beyond the edge of safety. I even preferred the version of Cinderella in which the wicked stepmother and stepsisters are finally put into spiked barrels and rolled down a hill. It seemed so much more apt than ‘they lived happily ever after’.

One of my favourites was Childe Rowland – originally a Scottish legend, but found in a book of English fairy tales. It’s the story of Burd Ellen and her brothers, the eldest of which was called Rowland. When they were playing ball together one day, Rowland threw the ball over a church. In running to fetch it, Burd Ellen accidentally ran ‘widdershins’ around the church so was snatched up by the King of Elves and taken to the realm of faerie.

The rest of the story tells of Rowland’s quest to fetch her back – a journey that also involved running ‘widdershins’ around a hill to be transported into the Elven Kingdom and then beheading everyone he met on the way to the King of Elfland’s Dark Tower!

For some time after reading this story, I eyed the local churches wistfully. The only problem was I had absolutely no idea what widdershins meant. But what a delicious mystery! I knew if I could only solve this puzzle I too could travel into the unknown world of elves and fairies. I knew the Elven Kingdom could be dangerous and dark, but I passionately wanted to go there. And I trusted I’d be able to return safely if I followed the advice given to Rowland and had nothing to eat or drink while I was there.

On one occasion, when there was nobody else around and no other kids within mocking distance, I even tried running as ‘weirdly’ as I could around the outside of a local church near my house. I spent what seemed a long time trying different ways of running, pausing at the end of each triple circuit to recite  ‘Open door, open door, and let me come in!”.

As far as I knew, I was safe from prying eyes – but I’m sure if anyone was watching it would have been an amusing sight. I’m sure John Cleese’s ‘funny walks’ were nothing compared with my weird and wonderful attempts. :)  But it didn’t work – the Elven Kingdom remained stubbornly closed. And I was never game enough to try it again for fear of being seen.

Much, much later I discovered widdershins means in a contrary or counter-clockwise direction or facing against the sun. Sadly for my earlier ambitions, by the time I learned this I’d grown past childhood. My belief in fairyland had gone the same way as my belief in Santa Claus and the Easter Bunny.

But, although I didn’t manage to work out how to ‘run widdershins’ into the fairyland of my childhood, maybe there is an adult parallel? There are certainly times in my life when I feel the need to be contrary – to travel ‘counter clockwise’, so to speak, when compared with everyone else around me. And I’m sure this is an experience shared by most folk – I think it’s part of the human condition really.

Maybe we should celebrate these times, rather than feel uncomfortable about them?

After all, aren’t there times when we need to be contrary – run counter to the norm – in order to glimpse the magic of new possibilities? And don’t we sometimes need to face against the sun and look into the shadows to discover the best of who we are?

And if you’d like to be inspired by the original story, I’ve managed this morning to find the full text of it on the web. So read the story of Childe Rowland for yourself – and celebrate the magic of contrariness.